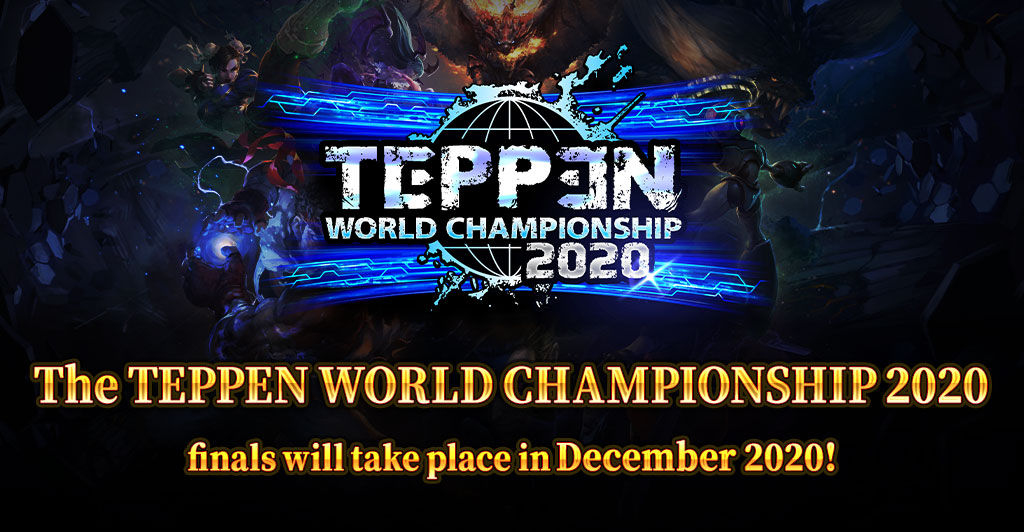 As we announced in-game on April 2, in an effort to cooperate with Japan’s efforts to limit the spread of the COVID-19 coronavirus, the TEPPEN team has made some adjustments to our workflow structure as we continue to improve the game.
During this time, we have been considering how to proceed with hosting the TEPPEN WORLD CHAMPIONSHIP 2020 (WC2020).

The date and rules for the Online Region CUP which was delayed has been finalized. In this announcement we’d like once again explain the entry methods for this tournament.

*Details about when WC2020 will take place and what prizes will be awarded will be released on a later date via News in-game and the official site.

The Two Ways to Enter

Method 1: Be one of the players with the most accumulated Tour Points (across all regions).

Method 1: Be one of the players with the most accumulated Tour Points (across all regions).

The top 20 players who accumulate the most Tour Points from each designated event will be awarded an entry to WC2020.

■Target Event
・Each monthly Ranked Match from January to September 2020.
*Although you may receive Tour Points from Ranked Matches from October 2020 onwards, they will not count towards receiving an entry to WC2020.

Compared to the other methods, this one spans over many months and requires steady, diligent effort.

*Click here to find out more about Tour Points and the Tour Points Rankings.
*Accumulated Tour Points are not limited to just your region and include all users from each region.
*In the case of ties in Tour Points, different factors will determine the final ranking such as the highest place achieved in previous Ranked Matches.
*Tour Points are reset in the following year. Tour Points earned in 2020 will not be counted when trying to obtain an entry from the year 2021 onward.

Top ranked players of the in-game Online Region CUP will be awarded an entry to WC2020.

■ The Online Region CUP
An in-game accessible tournament that is broken up between each region where players face off against each other and compete for rankings.

■ About Battles
Rankings will be determined by Battle Points won or lost based on the battle outcome.

*You must battle at least once to enter the rankings.
*Changes in Battle Points are determined by both the outcome of the battle and the difference in points between you and your opponent.
*If there is a tie, the competitor who reached their Battle Point total earlier will be ranked higher.
*The rankings shown during the tourney period are tentative. Once the tourney is over, the results will be calculated and finalized.

■ About Deck Editing
The following cards, Heroes and Hero Arts are available for use in the tourney.

*Heroes, Hero Arts, and cards are all unlocked and can be used freely.
*You may only use the golden cards, secret cards, and Hero Skins in your possession.
*You can edit your decks at any time.
*If there is someone in the top three who has gained an entry to the WC2020 final tournament through Method 1, then it will be passed on to the next available person starting from 4th place.
*In order to participate in the Online Region CUP, you must signup previously in game during the signup period. If the TEPPEN app is not distributed in your country, you will not be able to participate in the Online Region CUP.

Summary of the Methods

We eagerly await to see those brave TEPPEN players who go forth with their head held high, ready to face any challenge that awaits them!

*The contents of this page are subject to change without prior notice. Please be aware of this.