About the Grand Prix

How to see Grand Prix details 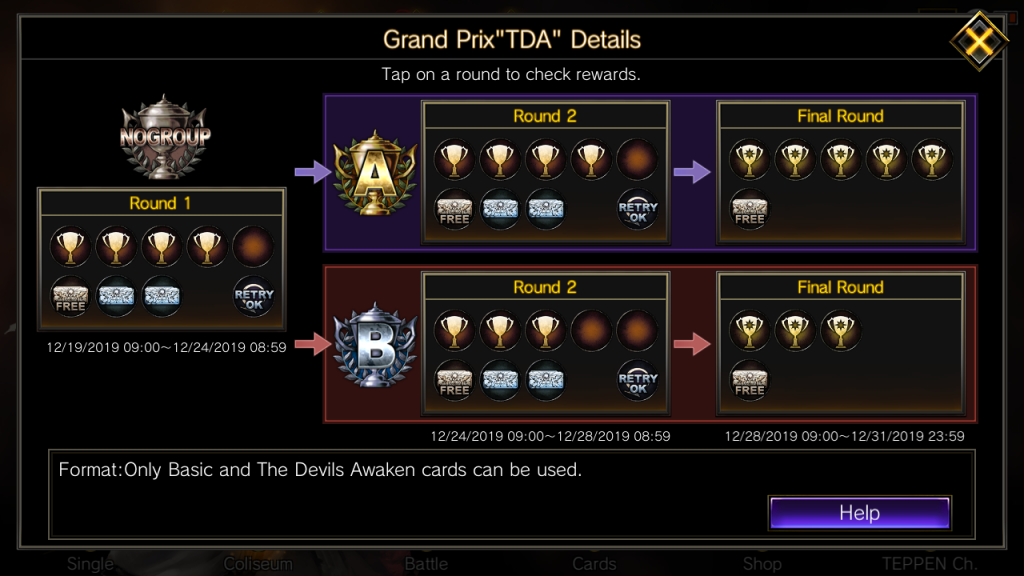 Grand Prix rules differ for each event. Rules for the events can be checked by pressing the following sequence of buttons from the Home Screen: Coliseum >> Grand Prix >> Rules
Tapping each round will allow you to view a list of rewards that can be earned during that round of the Grand Prix.

Pressing the ▼ on each reward will allow you to view its details.
You will randomly receive one item from reward sets that have the Random Reward icon displayed.
Icons under Grand Prix details are as follows.

The Grand Prix is a special competition held for a short amount of time.
The Grand Prix, unlike the month-long Ranked Match, is a competition held for 3 rounds over a roughly 2-week period where players compete to see how far they can win and advance.
Powerful players who have won and advanced to the final Final Round battle it out to determine the top player.
TEPPEN players putting their skills to the test over a fixed number of battles is what the Grand Prix is all about.
Forge your own deck to use in the Grand Prix and enter the fray. 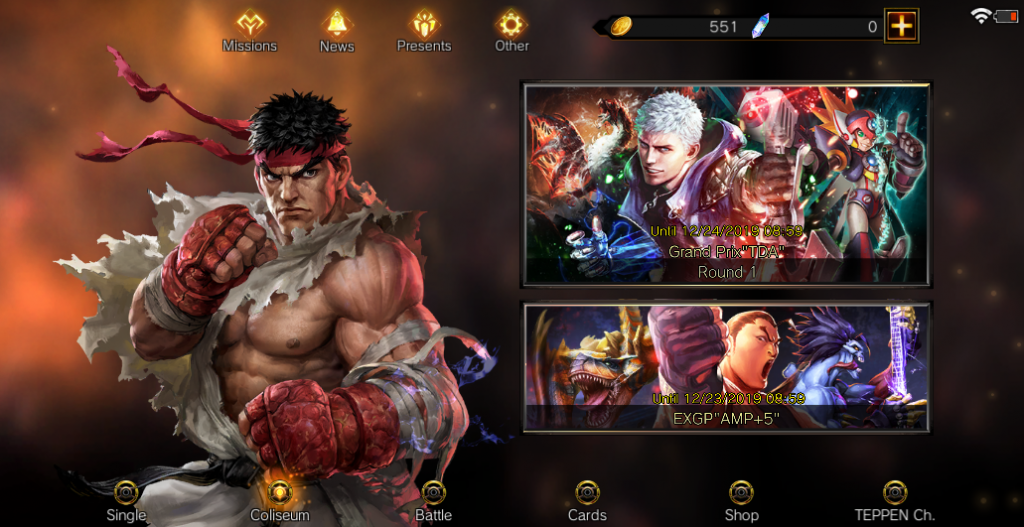 The following steps about how to advance in the Grand Prix will be explained in the following order.

1. How to enter the Grand Prix

During the Grand Prix, each round can be initially entered for free. Subsequent entry will cost Jewels x240, Zenny x240, or Grand Prix Ticket x1.
The final round, however, will be free because it can only be played once.
You can only enter a set number of times every day.
Rules such as the event period and entry conditions for the final round vary for each Grand Prix.
*3. Grand Prix Tickets can be obtained as rewards from Ranked Matches.

2. Making a deck for the Grand Prix 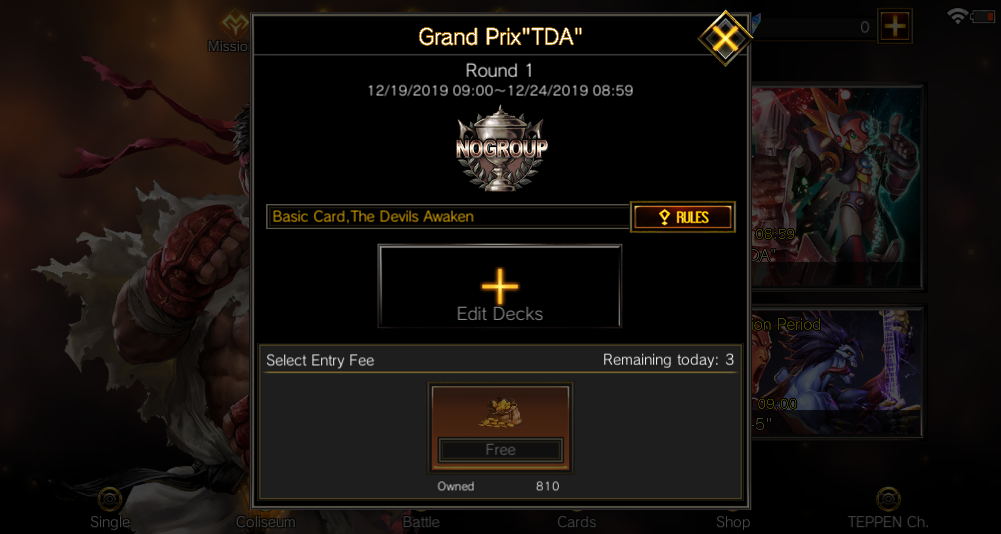 The Grand Prix is comprised of 3 rounds divided into the First Round, Second Round, and Final Round.
Within each round, players will battle each other a set number of times.
One round is held over the course of multiple days, and the round changes depending on the time period.
Grand Prix battles proceed in basically the same way as a normal battle.
However, just like the deck rules, each event may have special battle rules in place.
After the second round, players will be separated into groups A and B where they will be matched with and battle other players in the same group.
Groups will be explained in-detail later.

The group into which you are placed in the second round depends on the number of wins you got during the first round.

Similar to the Second Round, the Final Round is also divided into groups A and B. You will continue from your Second Round group.
Unlike previous rounds, you may only enter the Final Round once, and only the player who wins the battle may advance to the next battle.

Depending on the number of wins in the First Round, each player will be assigned to the A and B groups from the Second Round onwards, and this grouping will continue even if the player advances to the next round.
Rewards for groups A and B differ. Since by rule those in group A require a higher number of wins to advance, their rewards will be greater.
If all battles have ended, or you retire mid-round, results will be displayed and you may receive the rewards from that round.
An entrance fee must be paid to re-enter the round if you wish to battle again within the same round.

At the conclusion of the round, you may claim your rewards and they will be sent to your Present Box.
Reward slots will increase according to the number of wins within the round, and the rewards themselves will become more valuable.
If you retire from the Grand Prix mid-battle, rewards will be given to you based on your battle record at the time of retirement.

If the time period for the round you have entered ends, you will be granted rewards based on your highest battle achievement up until that time.
Rewards can be claimed by pressing the Grand Prix Button on the Home Screen.

See how far your skills can take you in the Grand Prix.
Become one of the proven players from group A and advance to the Final Round, where you will battle it out 5 times in the hopes of being crowned the ultimate victor.
Even if you don’t emerge victorious in your battles during the Grand Prix, you are guaranteed to receive a Pack Ticket, so be sure to join in the fun!
Also, rewards for groups A and B are the same, so even if you advance to the final, those in group B will still receive a Pack Ticket for the next pack to be released.
Even if your results from the first round place you in group B, don’t give up and continue to fight!
Continue to the next article for more info on the game!