Are you getting the hang of TEPPEN battles?
If you are starting to feel more comfortable, it might be time to try TEPPEN’s primary content: Ranked Matches.
Ranked Matches are heated card battles against players from around the world.
We’d like to take some time to talk more in-depth about them. 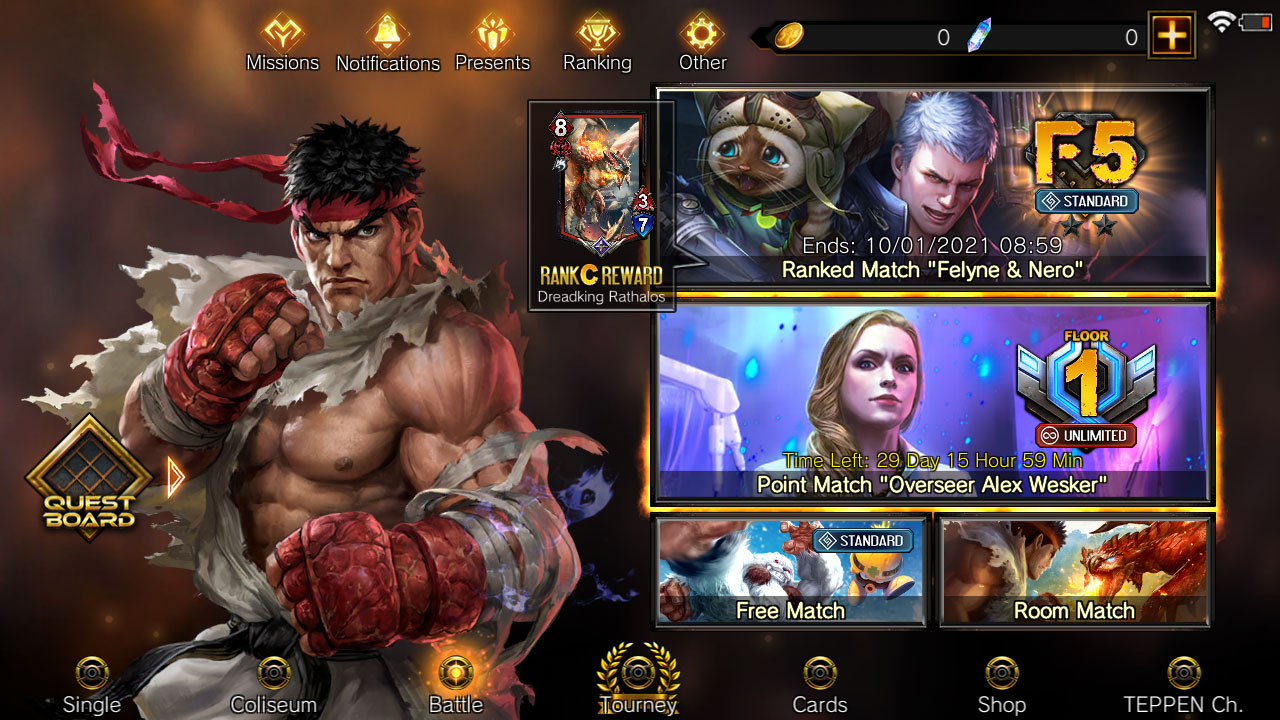 You can press the Ranking button at the top of the Home Screen to see the current season’s Ranked Match rankings and the prior season’s ranking results. 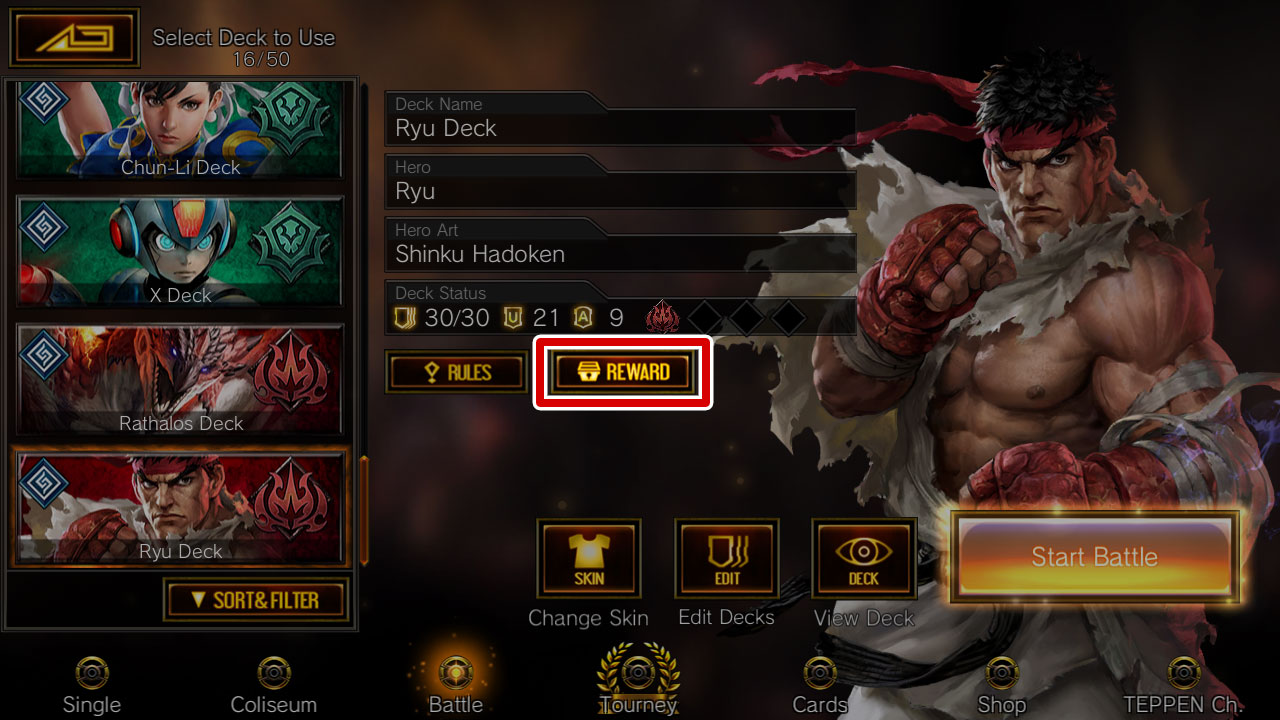 You can press the RULES button on the Ranked Match’s Select Deck to Use screen to see the card sets you can use during the current season’s Ranked Matches.

Pressing the REWARD button will allow you to view rewards that can be earned at the end of a Ranked Match season. 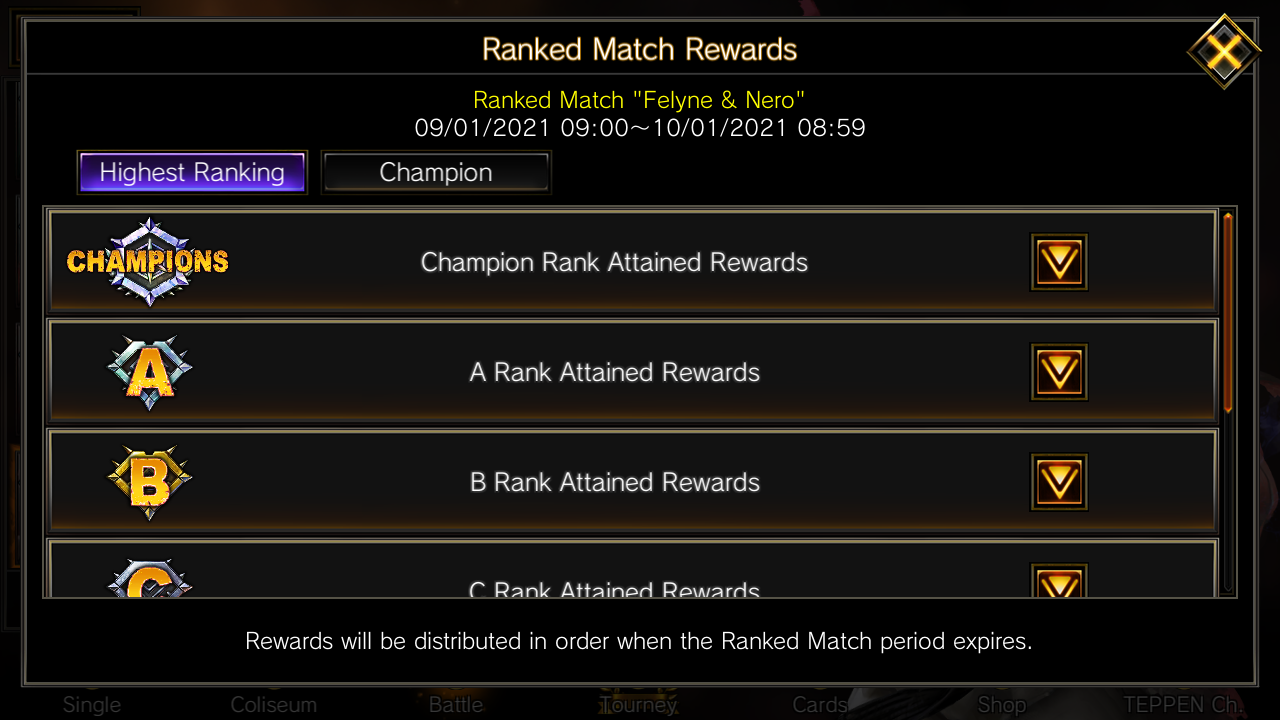 There are two categories for Ranked Match rewards: Highest Ranking and Champion. Each can be viewed by pressing each respective button.

Pressing the ▼ button will allow you to view reward details for each letter rank and ranking place.

There are six lettered ranks (F to A) and a seventh Champion Rank.
Each rank between F and A also has five classes.

With each victory, you earn one star, and with each defeat, you lose one star.
A set number of stars are required to get promoted to the next class for each rank.

At the Champion Rank, you play for points that determine your placing.
You will begin with 1600 pts.
With each victory, you’ll earn points, and with each defeat, you’ll lose points.
The number of points gained or lost at the Champion Rank are based on the difference between you and your opponent’s points.
You cannot be demoted from Champion Rank midseason, so challenge opponents without the fear of being demoted!

Just be aware that if you fail to participate in a single match in any season after reaching the Champion Rank, you will be demoted from that ranking.

These rules apply to Rank F, Rank E, Rank D, Rank C, and Rank B.
If you win three Ranked Matches in a row, you will earn an extra star as a reward for victories after that.
The more times you win in a row, the faster you’ll be promoted.

GIANT KILLER CHALLENGE will display if a Rank A were to go up against a Champion Rank.
If that happens, upon winning you’ll receive the GIANT KILLER BONUS!! and receive 2 stars.
Even if the Rank A side loses, the star will not be lost.
*The Consecutive Wins will be reset.

You will be fighting strong opponents, but this will also be a chance to earn stars at once. You should proceed with the battles carefully!

Your rank will not be demoted during a Ranked Match season, so go ahead and fight with as many opponents as you can!

If you get promoted to a higher rank, do everything you can to get to Class 4 or higher!
Even if you’re at Class 5 when the season ends, you’ll at least get the rewards for your final rank, so just do your best next time.
Getting to play against players from all around the world is really exciting, isn’t it?
This is your chance to present your deck and technique to the rest of the world, so don’t hold back and give it all you’ve got!
Continue to the next article for more info on the game!