This article aims to use simple, accessible decks to guide you through the important points of each Hero’s play style.

It is recommended that you try practicing these techniques with some of the featured decks after you finish reading.
The Practice and Chronicles modes found under Single in the main menu are ideal for this.

Once you think you’ve gotten the hang of it, mix in some new cards from packs to create your very own decks and try them out in Ranked Matches!

In the previous article “Learn Each Hero’s Play Style 3”, we introduced Rathalos and Chun-Li’s play styles.
In this fourth article we will be looking at the purple elemental Hero Dante and the black elemental Hero Nergigante. 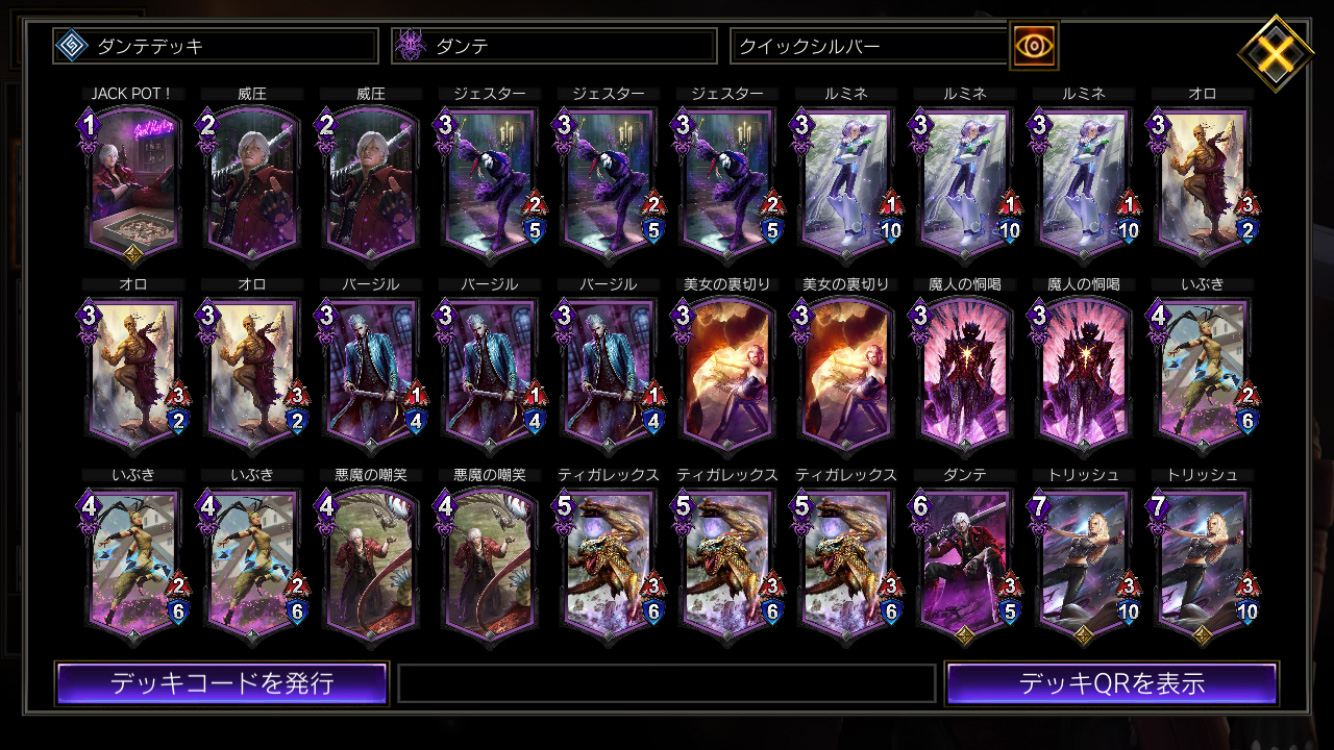 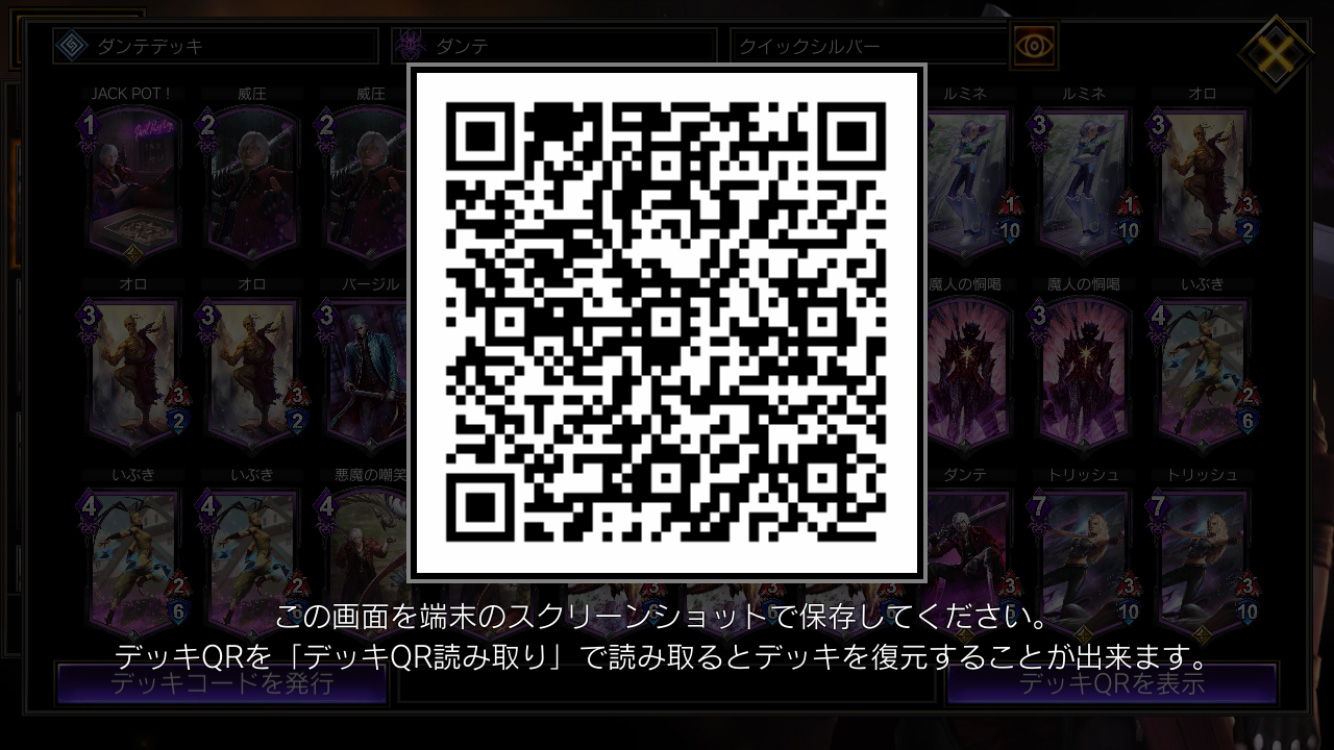 The Dante deck we’ll be using in this article is shown above along with its Deck QR.
This deck exclusively uses Basic Cards, so all players can replicate it in-game simply by scanning the accompanying Deck QR.
It’s recommended that you take a few minutes to familiarize yourself with the cards in the deck and the details of Dante’s Hero Art before proceeding.

In Dante’s basic deck, there are multiple Unit Cards with Resonate that increase Attack and HP.
First, Dante puts units with Resonate onto the field, then uses Action Cards to disrupt his opponent’s plan, while getting stronger at the same time.

By doing so, your units will be strengthened, and you’ll be in a more favorable position than your opponent.
However, you’ll need to get used to the right timing to play Action Cards and managing your MP, so read the article to learn how to play it effectively.

▼ Learn the ins and outs of Resonate!

We’ve summarized what you need to know to make the most out of Resonate, so please make use of it.

[Traits of Unit Cards with Resonate]

There are 4 kinds of units with Resonate in Dante’s basic deck.
Resonate has different effects depending on the unit, so “Oro (DANTE 004)” will have its HP increased, and “Ibuki (DANTE 006)” will gain ＜Flight＞.

The key to victory is that you should know the power-up details of the cards you have before starting the battle.

1. Put a unit with Resonate onto the field.

2. Play an Action Card (MP or type does not matter)

3. Friendly unit’s Resonate will trigger and they will grow stronger.

Resonate triggers the instant you play the action card, so when Active Response starts, the unit is already strengthened.
Resonate will also trigger during Active Response as well, so make the most out of the AMP and don’t be afraid to Action Cards freely.

These Action Cards can lower enemy units’ Attack for one attack.
Protecting your units by lowering your enemies’ Attack is a good chance to trigger Resonate, so use it to your advantage.
In the basic deck, “Jackpot! (DANTE 013)” is an easy-to-play card with an MP cost of 1, so it’s perfect for triggering Resonate.

You can do things like protect your units from direct damage Action Cards as well as prevent your opponent from healing, so it’s very flexible. Try and find the right timing where you can disrupt your opponent the most.

To make the most out of cards with Resonate, you’ll need Action Cards. The ideal balance is about 2-3 Unit Cards and 2-3 Action Cards.
However, Dante’s basic deck only has 9 Action Cards in it, so it might be difficult to draw them.
With that in mind, you should have “Ibuki (DANTE 006)” in your hand as she can withstand combat with enemy units without the need of activating her Resonate effect.

Resonate gives “Ibuki (DANTE 006)” ＜Flight＞, so you can chip away at your opponent’s Life.

It’s difficult for this deck to destroy strong, high-costing MP units. For those units, it’s best to use the Hero Art Quicksilver.

▼ Use the Hero Art Quicksilver to Control Combat Between Units

Dante’s first Hero Art, Quicksilver, inflicts ＜Slow＞ and “Cannot counter” on an enemy unit.
＜Slow＞ doubles the time it takes for the attack prep gauge to fill, and “cannot counter” means that a unit will not counter when attacked.
By using these two effects, your friendly unit has more chances to attack, and you can control a strong unit’s combat.

4. A Tidbit of Advice to Win With Dante

Since units with Resonate do not have high initial values for Attack and HP, it’s best if you swiftly trigger Resonate and strengthen them.
For that reason, when you plan to put those units on the field, be sure to have enough MP saved up to play an Action Card right after.

If you do so, your unit will be strengthened right after appearing on the field, and you lower the risk that it will get destroyed by an enemy unit.
Also, as explained in Progression of Triggering Resonate, it’s most efficient to play many units with Resonate first before playing Action Cards.

Like in the example below, you should try to strengthen many units as fast as possible and attack your opponent all at once.

1. Save up as much MP as possible to play units and Action Cards… 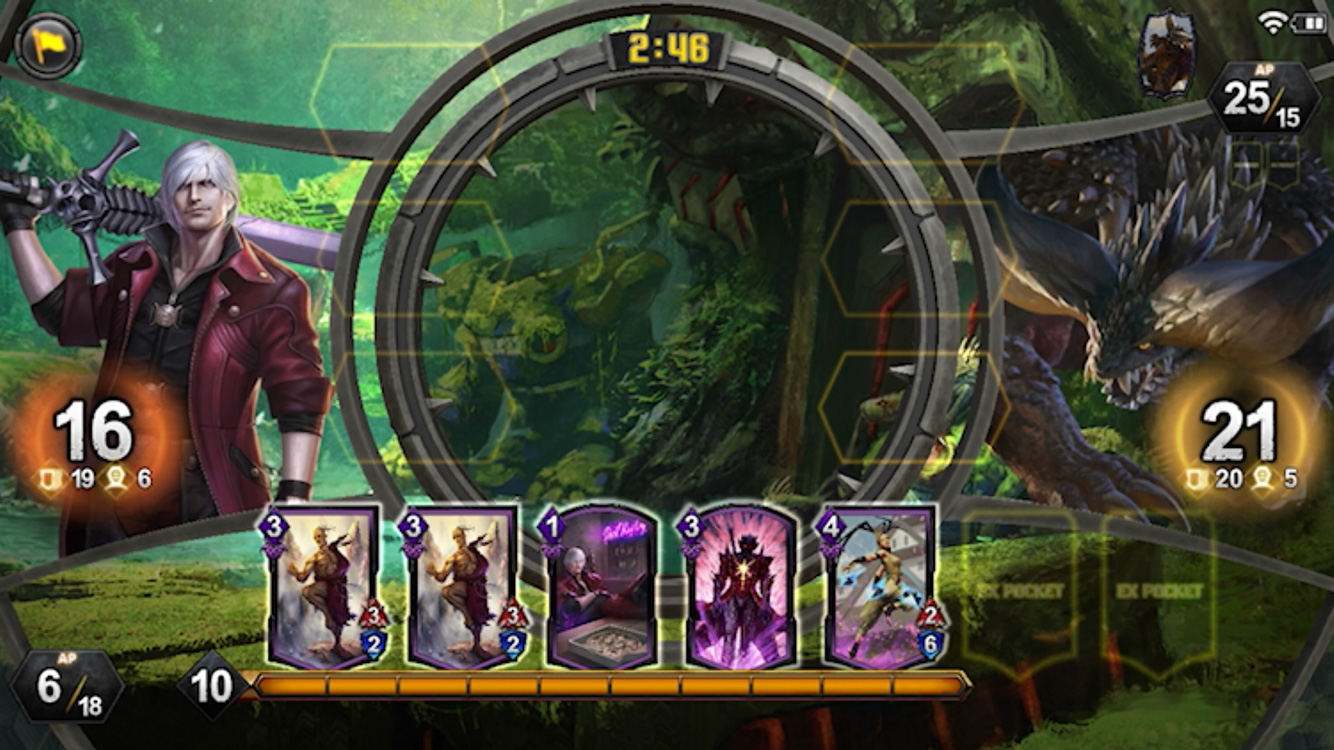 2. Put your units on the field, and follow up with an Action Card to trigger Resonate. 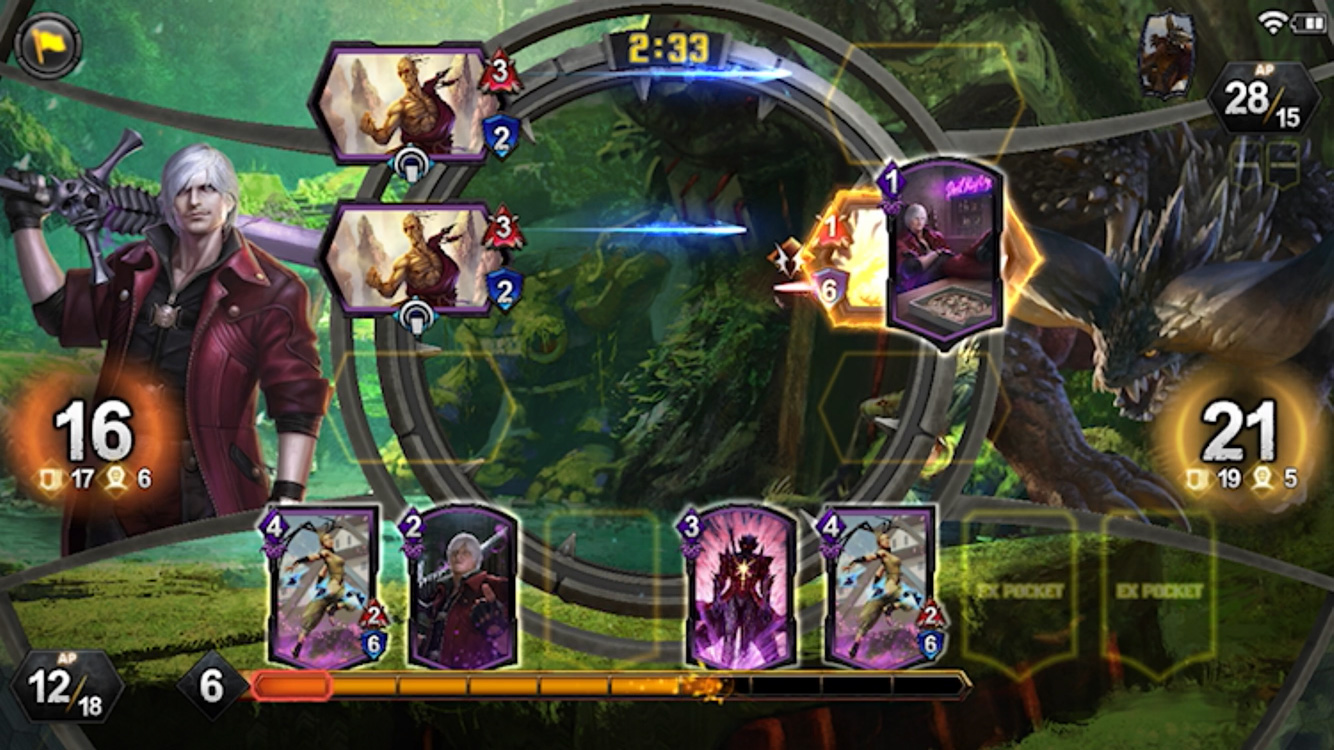 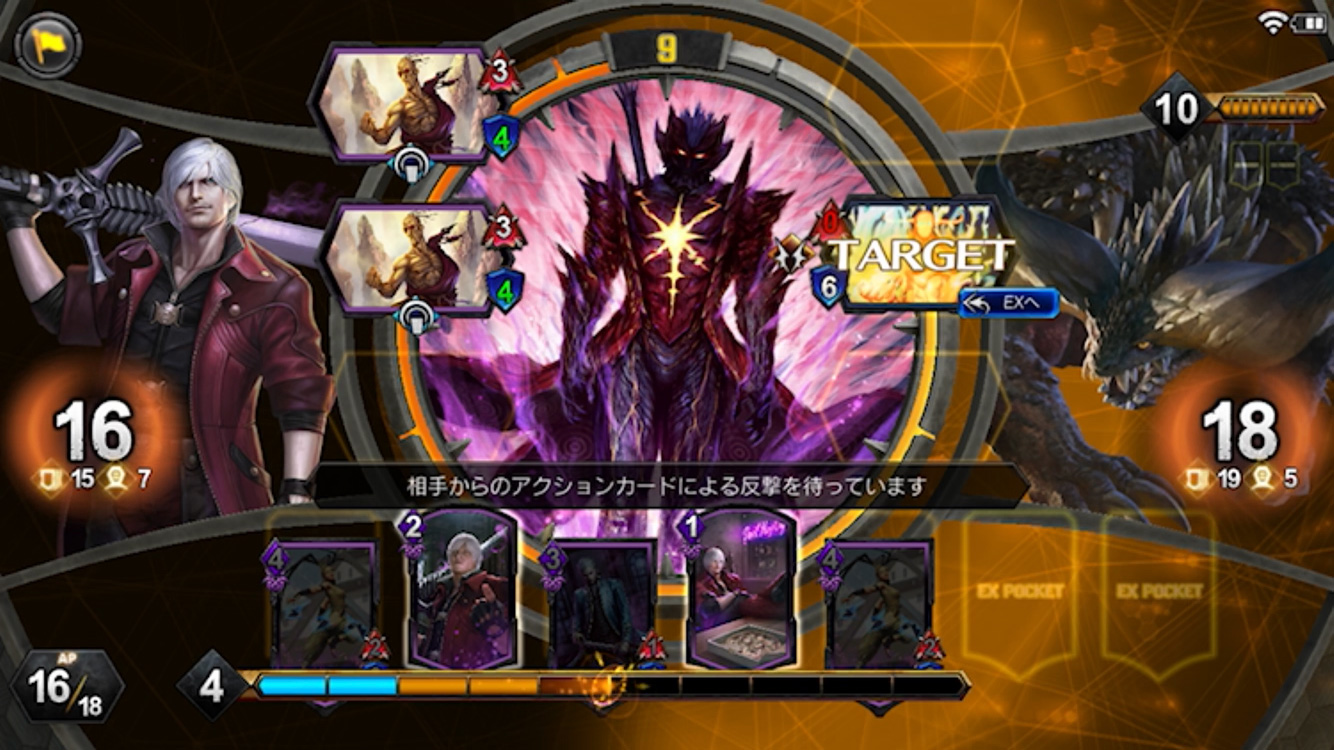 In this example, to play 2 “Oro (DANTE 004)”, “Jackpot! (DANTE 013)”, and “Demonic Intimidation (DANTE 012)” all at once, you will need to have the maximum amount of MP saved up.
By playing this way, your units will reach 4 HP, while returning an enemy unit to the EX Pocket.
From this point onwards, use more Action Cards and strengthen your units even further.
Your opponent will also be attacking you while you save up MP, but you’ll be able to turn the tides with your Resonate powered-up units, so you’ll just need to keep your cool until then.
Also, in the second step, if your opponent responds with an Action Card, you can use the AMP gained during Active Response meaning you’ll only need to spend 8 MP.

▼ Increase your Action Cards, and Make a Resonate Specialized Deck

Filling your deck with low MP cost Action Cards is a good way to trigger Resonate as often as possible.
With the basic deck, try taking out cards like “Jester (DANTE 001)”, “Lumine (DANTE 002)”, and “Tigrex (DANTE 003)”, and instead try replacing them with low MP cost cards like “Jackpot! (DANTE 013)”.
Also, his second Hero Art, Ebony & Ivory, will make Resonate trigger an additional time for all units, so your units will get stronger very quickly.
Once you’ve gotten used to the basic deck and how Resonate works, try making it a more specialized Resonate deck.

▼ Protect Your Hero with the Hero Art Devil Trigger!

As explained above, it’s most effective to save up MP to play cards with Resonate.
However, when saving up MP, your defenses will definitely be lacking, and your Hero will likely have to take many attacks.
To fight against that, try using Devil Trigger.

If you use this Hero art, the damage your Hero takes will be reduced to 0 for 10 seconds, so you don’t have to worry about defending, and just focus on strengthening units with Resonate. 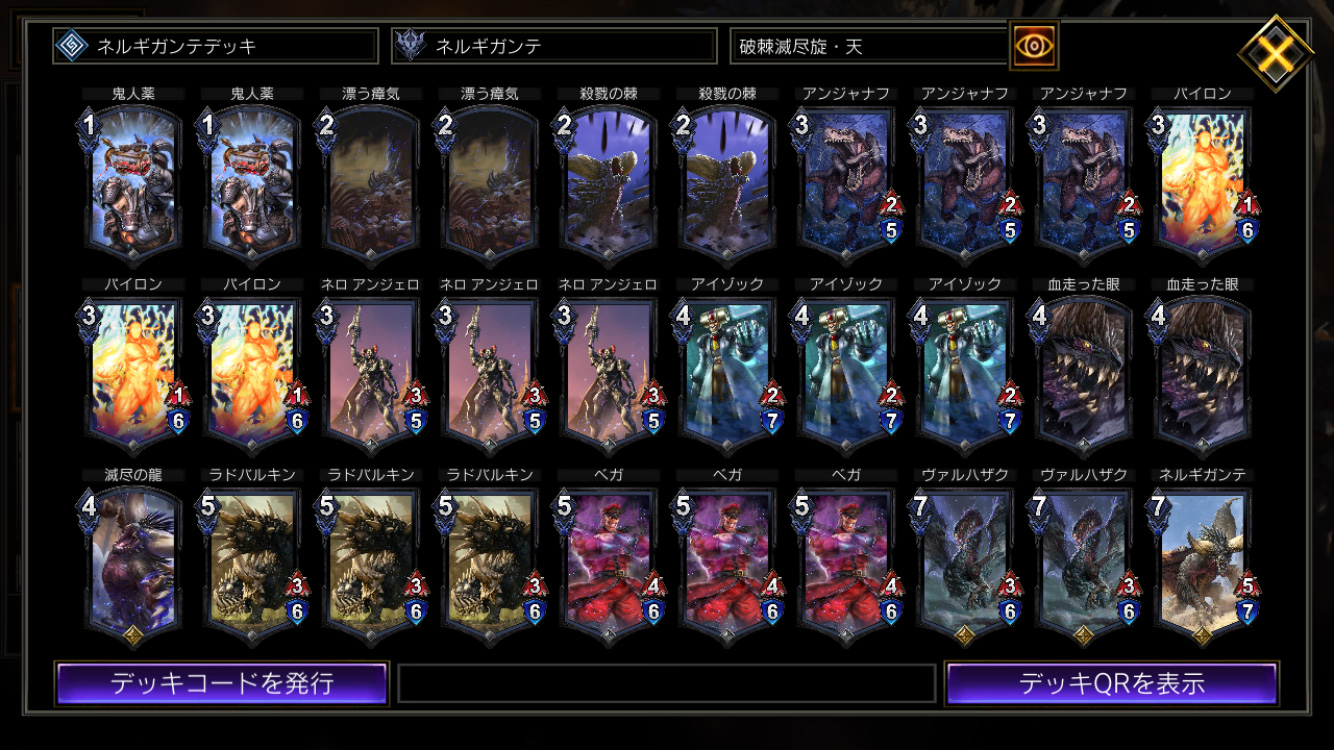 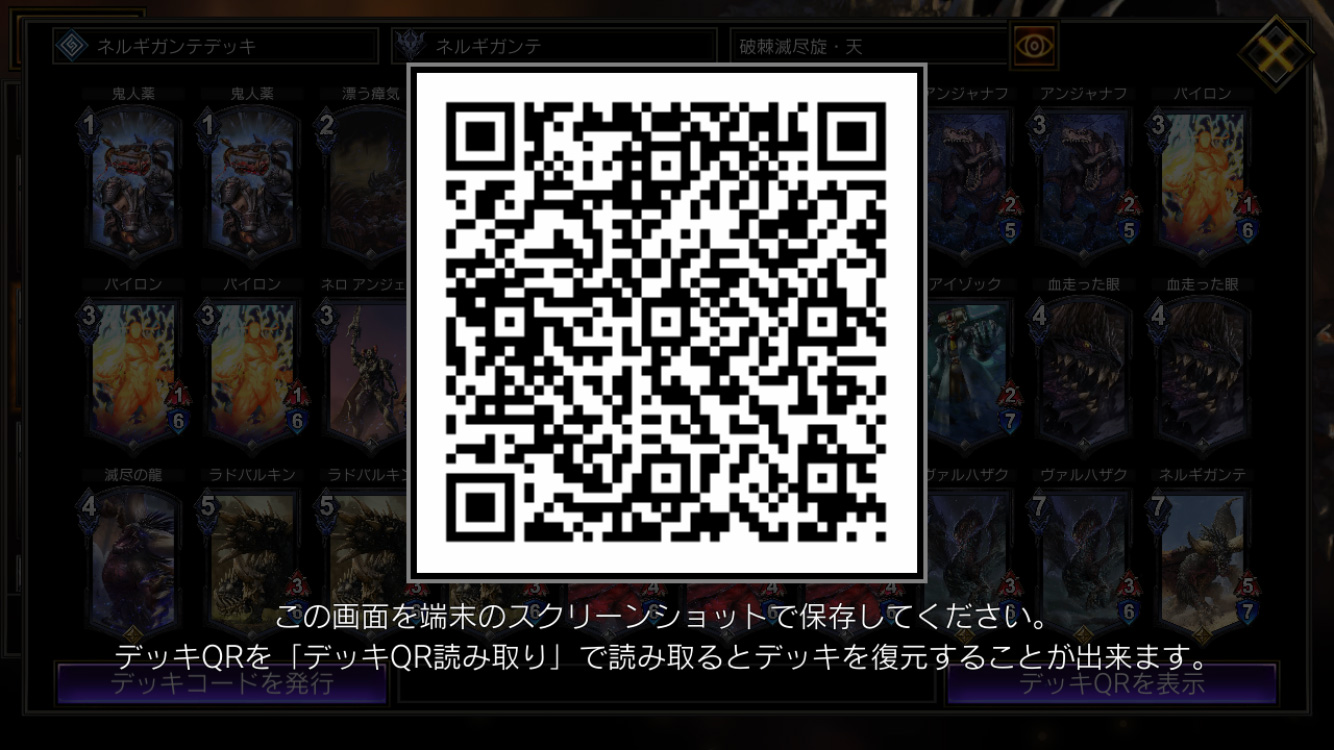 The Nergigante deck we’ll be using in this article is shown above along with its Deck QR.
Just like Dante’s, this deck exclusively uses Basic Cards, so all players can replicate it in-game simply by scanning the accompanying Deck QR.

It’s recommended that you take a few minutes to familiarize yourself with the cards in the deck and the details of Nergigante’s Hero Art before proceeding.

Nergigante is a Hero that trades off his own Life and units in exchange for powerful abilities.
The basic strategy for Nergigante’s deck is to use cards with Sacrifice, attack quickly in the early game, and use the Hero Art to immediately decide the match.

Because you have to constantly assess the risks versus rewards while battling, Nergigante is not recommended for beginner players. However, for those who want to dominate with a Hero who specifically specializes in offense, Nergigante is perfect for you.

Units with Sacrifice have higher HP and Attack than units with the same MP cost, and can also have more powerful abilities.
In exchange, your Hero loses Life when you play them, so playing them recklessly can put you in a tough spot really quickly.

These downsides are quite difficult, but Nergigante’s Hero Art gets stronger equal to the amount of Life lost from Sacrifice. Another Hero Art can only be used at 15 Life or lower, so you can make the most out of those downsides.
Pay attention to your Hero’s remaining Life and use these strong units to defeat your opponent’s units to gain victory.

▼ Spike Launch Gets Stronger with Sacrifice and Takes Out Units in One Go!

The Hero Art Spike Launch deals damage split among enemy units equal to the amount of Life lost from Sacrifice.
The maximum damage it can deal is 12 damage, so using it once you reach that amount will allow you to take out almost any unit.

Using cards with Sacrifice in the early game will allow you to deal the maximum damage in the mid-game, so use it to take out enemy units all at once.

▼ The Hero Art Change Form Can Be Used At a Certain Life Total or Less!

Nergigante’s third Hero Art, Change Form, can only be used at 15 or less Life.
Even though it has a condition before it can be used, it gives all units in your hand and EX Pocket +2 HP and +2 Attack, so it can greatly shift the balance of power into your favor.

You’ll need to calculate the damage you take from enemy attacks and from Sacrifice, so once you’ve gotten used to Nergigante, give it a try.

Action Cards with Sacrifice are stronger than other cards of similar MP cost.
For example, in the basic deck, “Demondrug (NERGIGANTE 010)”, costs 1 MP and gives +1 to both Attack and HP.
The other 2 action cards, while having conditions, can destroy enemy units just by using 2 MP.

Use these cards to create a favorable position in the early game, and attack your opponent all at once.

1. Play an Action Card with sacrifice.

3. Active Response ends, and Life is lost as the Action Card’s effect triggers.

[Traits of Action Cards With Self-Destruct]

These Action Cards greatly strengthen units, but have the downside of after one attack, the unit is destroyed.
These cards are effective when you want to destroy a powerful enemy unit, or deal heavy damage to an enemy Hero.
Also, they will not be destroyed until they deal one attack, so you can use them in the following ways.

Example of Countering With A Unit With Self-Destruct

2. Destroy the enemy unit with a counter (counters are not considered attacks, so even it deals damage to the enemy, it will not destroy itself).

3. Continue on and attack the enemy Hero (once the Hero has been attacked, it will destroy itself).

The self-destruct effect will only trigger when the unit itself attacks.
Playing like this will allow you to reap the benefits of the strengthened unit both when countering and when attacking.
If you’re trying to play like this, be sure not to play “Bloodshot Eyes (NERGIGANTE 012)” before your attack gauge has reached the end.

▼ Use the Hero Art Spike Divebomb to Greatly Power-Up a Unit!

Nergigante’s first Hero Art, Spike Divebomb, strengthens a friendly unit with +4 Attack and +4 HP.
It’s a very powerful effect, but like “Bloodshot Eyes (NERGIGANTE 012)”, it has the downside of destroying itself once a single attack has been done, so try following the example above to get the timing right for it.

8. A Tidbit of Advice to Win With Nergigante 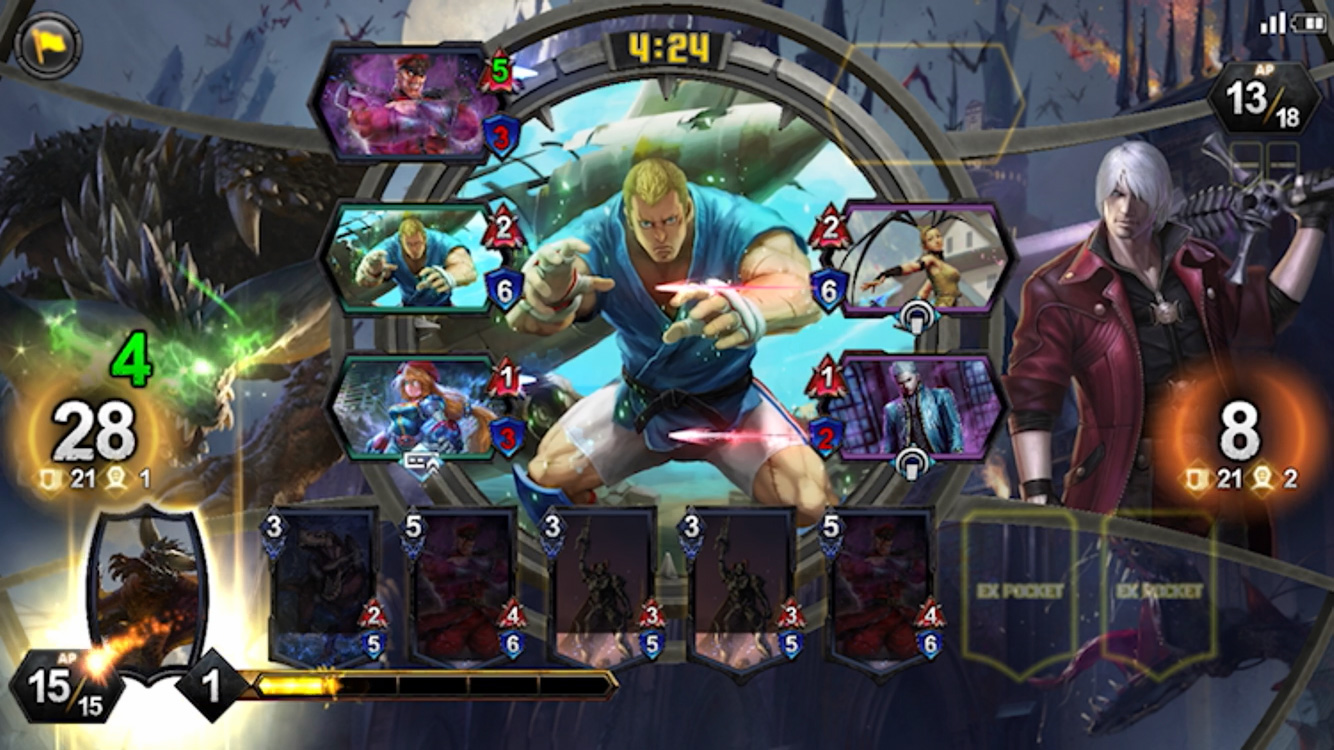 You’ll be gaining more MP than your opponent, and so you can keep playing cards with sacrifice steadily. If you get into trouble, you can always use green elemental cards that restore Life.

If you plan to put multiple elements in a deck, it’s best to stop at 2.