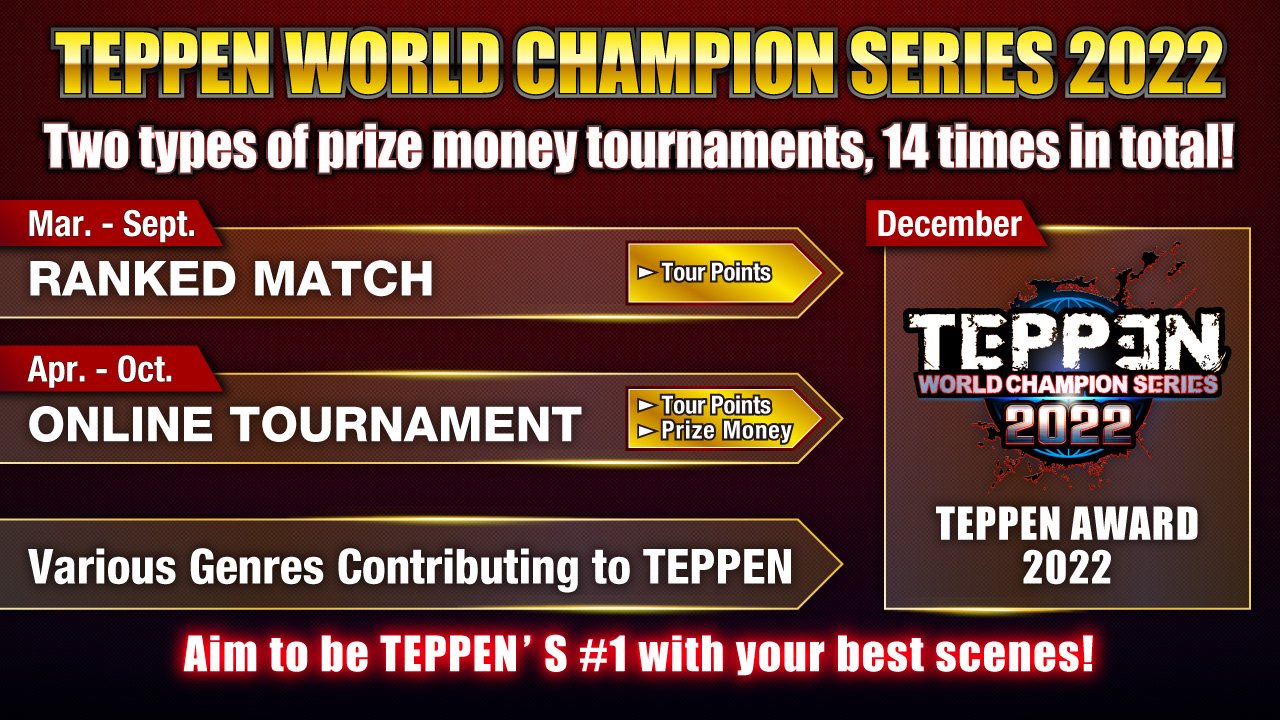 The “TEPPEN WORLD CHAMPION SERIES 2022 (WCS2022)” is the name of the tournament series in the Ultimate Card Battle: TEPPEN that lasts throughout the year 2022.
Participants will compete for Tour Points in the cash prize Online Tournaments and in-game Ranked Matches.
We will honor not just the top players of WCS2022, but also those who contributed to various TEPPEN genres in TEPPEN AWARD 2022, scheduled for December!

* Tour Points will be received according to your ranking place in Ranked Matches.

* Information Submission Deadline
Those that have earned an entry to the Finals will be asked to submit information such as their player name and any decks they will use.
An email will be sent in-game after the the Qualifiers results have been announced, so please read the details thoroughly and reply by the Information Submission Deadline.
Please be aware that if you do not reply by the deadline, you may not be able to participate in the Finals.
* Attendance checking and final confirmations are made before the start time of the Finals. Please note that if you are late for the attendance checking, you may not be able to participate in the Finals.
* Ranked Matches and Online Tournaments schedule are subject to change. Please be aware of this.

Enter the Qualifiers and Get an Icon!

Enter the ONLINE TOURNAMENT and meet the specified requirements to receive a Player Icon featuring the tournament logo of the month.

* Player Icons will be sent to your in-game Presents sometime in late April. Claim them in Presents on the Home Screen.
* Presents will be lost if not claimed within 30 days.
* For more info on how to obtain the Player Icons from May on, please check in-game during the entry period of the corresponding month’s Qualifiers. 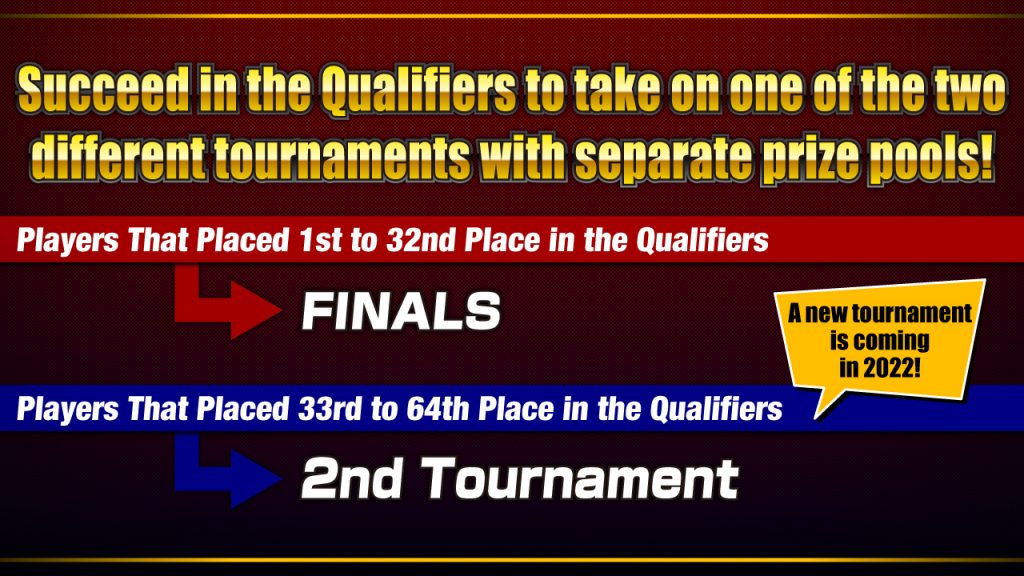 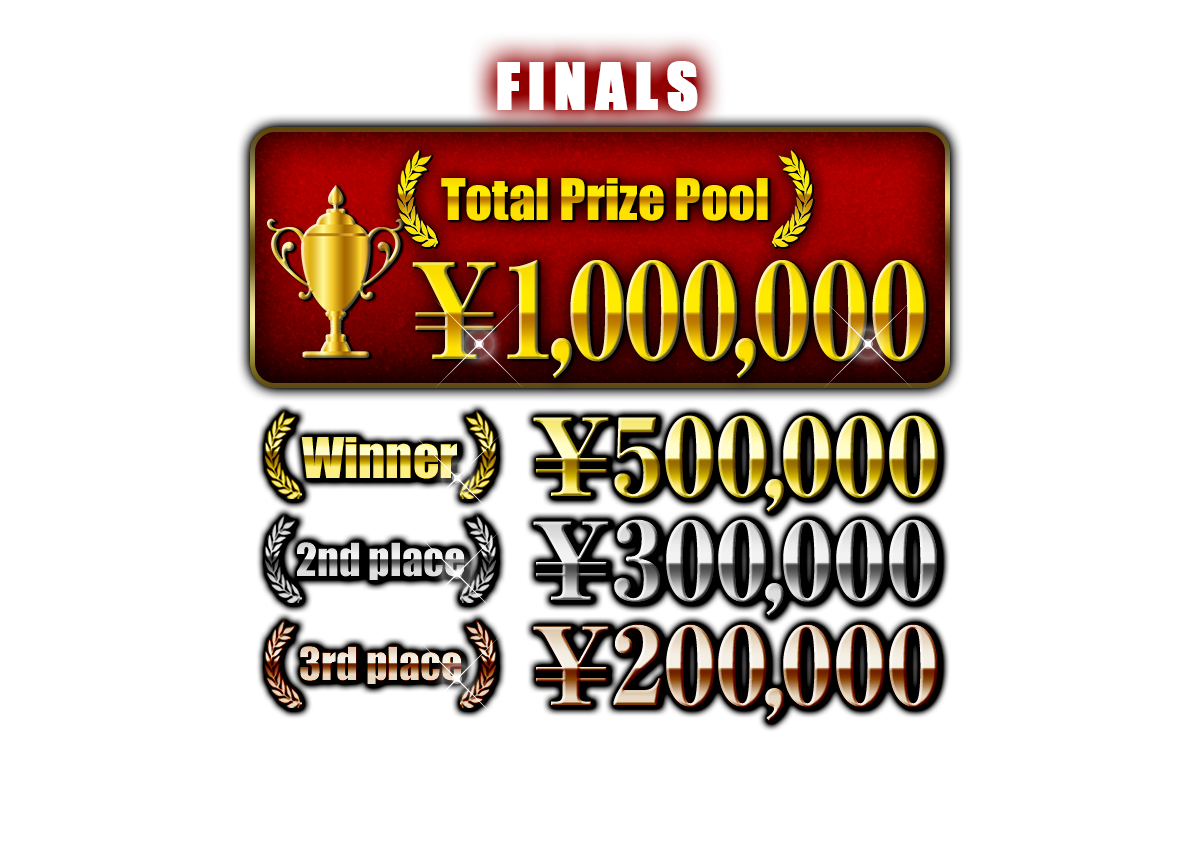 ONLINE TOURNAMENTs are held on a monthly basis and are one way of battling players from around the world.
ONLINE TOURNAMENTs consist of QUALIFIERS where you compete with Battle Points, and a tournament-style FINALS.
The 32 players that place 1st to 32nd in the qualifiers will earn an entry to the finals, which has a prize pool of 1,000,000 yen.
Those that place 33rd to 64th will instead move to our 2nd Tournament, a new tourney that has a prize pool of 100,000 yen.
Also, the top players in the rankings based on Tour Points earned during the ONLINE TOURNAMENTs will be honored during TEPPEN AWARD 2022 scheduled for December!

* Each Qualifiers’s Entry Period schedule will be updated regularly in the latest information area.
* Each tournament’s date is subject to change. Please be aware of this.

Please check the regulations ahead of time for the Qualifiers and Finals entry conditions.

ONLINE TOURNAMENT
・QUALIFIERS
Tour Points will be received according to your ranking place in the Qualifiers.
Tour Points will be received once the Qualifiers finishes and final ranking places are finalized.
The players that place 1st to 32nd in the qualifiers will move forward to the finals.
Also, those that place 33rd to 64th will instead move to our new 2nd Tournament.

・FINALS
The players that place 1st to 32nd in the qualifiers, Tour Points will be received according to your ranking place in the finals.

* Those who have acquired rights to enter the finals and 2nd Tournament will be notified by an in-game message. Please respond by the specified date to let us know whether you will participate.
Failure to respond by the specified date will be considered a withdrawal from the tournament.
* If you place 1st to 32nd in the qualifiers but do not enter the finals, you will receive 1 Tour Point regardless of your ranking.
* 2nd Tournament participants will not receive any additional Tour Points. Also, if you place 33rd to 64th in the qualifiers but do not take part in the 2nd Tournament, you will not lose any of the Tour Points you have gained in the qualifiers.

【If cumulative Tour Points are tied】
If there are players with the same overall Tour Points, the player with the higher number of “(1) participation count”, “(2) average ranking”, and “(3) most recent ranking” in the tournament, where Tour Points can be earned, in descending order will be used to decide the top player.

* Contents and conditions are subject to change without prior notice. Please be aware of this.